Diversified in the News 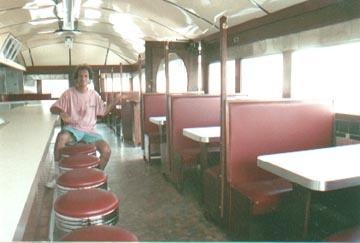 "They'd arrive at their location," Harwin says, "and, literally, you'd plug them in." Hence the long, narrow shape.A native of Cleveland Heights, Harwin first caught the diner bug in Europe, of all places, where he was trading old cars and motorcycles. He got wind of the coming trendiness of diners, part of the general rage for Americana among sophi- sticated continentals.

"My first diner was a pretty interesting one," he recalls. "It was a stream- liner in Ellwood City, Pennsylvania. Walking into it was like entering a time warp. Including the waitresses." Harwin calls that first diner "a major learning experience: ship- ping problems, structural problems, cost factors. It was the kind of disaster after which most people would call it quits." Harwin's contributions to Cleveland diner life include the recently added annex to Ruthie and Moe's classic diner on Downtowns Prospect Triangle, but more are coming. The Western Reserve Historical Society is close to final- izing a deal with Harwin to buy and refurbish a diner for its museum. And in Cleveland Heights, local entrepreneurs are planning to combine two of Harwin's diners into a single res- taurant on an empty lot on Lee Road. "If it happens," says Harwin, "it's going to be a national landmark - what all other diners strive for."

I'm into old stuff," says Steve Harwin. "I'm into old cars. I live in an old schoolhouse." Most stri- kingly, Harwin is into what he calls the "classic American diner." Harwin doesn't just love the durned old places the way you and I might, sitting down for a cup of Joe and a piece of pie. This resident of Cleveland's Little Italy buys and sells full-sized diners like Pokemon cards.

I'm considered a commercial archeologist," he says. "I traipse around places like Pennsylvania carrying photos of old diners, asking people, 'Have you seen anything like this?"'

When Harwin finds a diner that fits his very strict criteria (more on that later), he whips out his checkbook, buys the diner, transports it, re- furbishes it and (he hopes) sells it to one of the hundreds of individuals and organiza- tions around the country who seem to be dying to own one of these memory-laden grease crates.

Harwin says he is the only one in America to occupy his particular trading niche. His stock comes and goes, but right now he has seven full-size, classic, all-American diners cooling their Formica counters in a warehouse, waiting for buyers to come and take them away. They are not expected to be there long. The diners Harwin deals in ("I'm a purist") were built between the 1930s and 50s. What differentiates them from ordinary lunch counters, greasy spoons and cafes of the period is that they are prefab architecture - designed to fit on the back of a truck for shipping.

To see more pictures of Steve Harwins diners, as well as other diner-related information, consult his website: www.diversifieddiners.com.